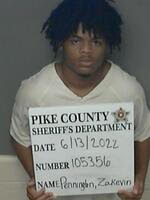 UPDATE: Brundidge police say a suspect has been arrested in a murder investigation.

Police say 18-year-old Zakevin Pennington of Brundidge has been charged with murder and is being held on a $200,000 bond in the Pike County Jail.

According to police, 21-year-old Jalen Harris was pronounced dead on the scene after a shooting at Galloway Park on Sunday.

The Brundidge Police Department did not release any additional information regarding the shooting such as what time or day it happened, nor the circumstances surrounding the shooting.

The Pike County Sheriff’s Department and Troy University Police responded to the scene.