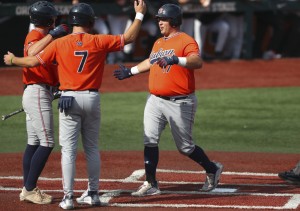 Sonny DiChiara hit his 22nd home run, Blake Burkhalter pitched 2 2/3 innings of hitless relief for his 15th save, and Auburn beat No. 3 national seed Oregon State 4-3 on Monday night to secure the final spot in the College World Series.

DiChiara opened the scoring in the third inning with a two-run homer. It was Auburn’s first hit, and DiChiara’s second — both homers — of the super regional.

Auburn reliever Carson Skipper (6-3) retired five straight batters, including three strikeouts, before Burkhalter entered in the seventh with two on and one out. Burkhalter struck out two to preserve Auburn’s lead and retired the next six to earn the save.

Justin Boyd hit a triple in the third and later scored on Jacob Melton’s groundout to pull Oregon State within 2-1. Boyd added a two-run homer in the seventh, his ninth of the season, to make it 4-3. Boyd was 3 for 5.