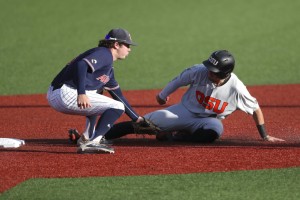 The teams play again Monday with the winner advancing to the College World Series.

Auburn (41-20), which won 7-5 Saturday in Game 1, scored 58 runs in its first its previous four games. The Tigers’ five hits Sunday were their fewest since they also had five in a 6-3 loss to Kentucky on May 21.

Matthew Gretler led off the fifth inning with a single, advanced to second on a sacrifice bunt by Kyle Dernedde and scored on a throwing error when Justin Boyd dropped a base-hit bunt down the third-base line that gave Oregon State (48-17) a 3-2 lead.

Hjerpe (11-2), who was originally scheduled to start Game 1 but was scratched due to an undisclosed illness, gave up three runs on three hits with two walks. Ben Ferrer gave up two hits with no walks and three strikeouts over 3 1/3 scoreless innings of relief to earn his third save of the season.

Melton hit the ninth pitch of the at bat over the wall in left-center field and Bazzana also solo shot in the top of the fourth to give the Beavers a 2-0 lead but Cole Foster, Brooks Carlson and Brody Moore each doubled in the bottom of the inning as Auburn tied it 2-2.

Bazzana drew a two-out walk, stole second and advanced to third on a wild pitch before he scored on a single by Jake Dukart to give Oregon State a 4-2 lead in the sixth.