Alabama Senior Trooper Marcus Golden did not realize how close he was to delivering a baby when he pulled over a vehicle on January 24. 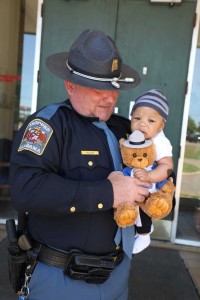 Melissa Stevens was being driven to the hospital by her cousin Debrica Jackson after she went into labor. Jackson was traveling at a high rate of speed on the I-65 near Prattville when Trooper Golden initiated a traffic stop to see if there was a problem. That was when he discovered Stevens was in active labor and she was very close to delivering her baby.

Trooper Golden immediately called an ambulance and comforted Stevens while they waited. When Stevens made it to the hospital, she only needed to push twice before Legend greeted the world.

Trooper Golden and Baby Legend officially met back in May and again in June.

Melissa Stevens, Trooper Golden, and Baby Legend are planning to meet up every year on January

24 to commemorate the day a legend was born.