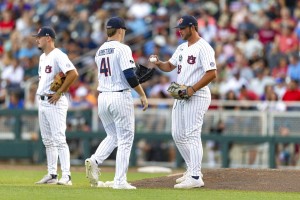 Will McEntire limited Auburn to three hits and a run in seven innings, Peyton Stovall became the first player in 13 years with five hits in a College World Series game, and Arkansas eliminated the Tigers with an 11-1 victory Tuesday night.

The Razorbacks (45-20) moved to the Bracket 2 final against Mississippi. They would have to beat the Rebels on Wednesday night and again Thursday to go to the best-of-three CWS finals this weekend.

Auburn (43-22) finished with 18 more wins than a year ago and made it to Omaha after being picked last in the Southeastern Conference West.

McEntire gave the Hogs the quality start they needed after they used seven pitchers in a 13-5 loss to Ole Miss on Monday.

McEntire (2-2) retired the first 11 batters he faced before Sonny DiChiara singled to center with two outs in the fourth. The 6-foot-4, 225-pound right-hander struck out a career-high nine, walked one and didn’t give up a run until Bobby Peirce homered leading off the seventh.

Last season, McEntire sat out as a redshirt and already had joined his summer team in Minnesota when the Hogs played in super regionals. He watched those games from his motel room in Duluth.

This season, McEntire continued biding his time and didn’t make the travel roster until April. He made some midweek starts and worked out of the bullpen before earning a more significant role the last month.

McEntire started the super regional-clinching win at North Carolina, throwing 5 2/3 scoreless innings. He was even better on a bigger stage Tuesday.

Relying on a low-90s fastball and a devastating curve, McEntire struck out six in a row at one point. His confidence grew as his team got out to an early lead and built on it.

Braydon Webb doubled into the left-center gap on Barnett’s first pitch of the game and Stovall followed with an RBI single to begin his 5-for-6 night. The previous player with five hits in a CWS game was North Carolina’s Dustin Ackley in 2009.

The Razorbacks added three runs in the third inning and four more in the fourth, highlighted by Chris Lanzilli’s 400-plus-foot homer down the left-field line.

Lanzilli also homered in a 17-2 win over Stanford on Saturday and has 10 for the season after hitting 42 in four years at Wake Forest.

For the first time in the 75-year history of the CWS, each of the first 10 games was decided by four or more runs.