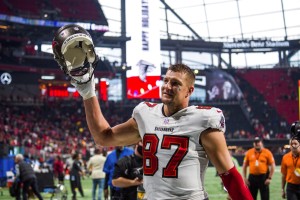 Rob Gronkowski won’t be joining Tom Brady for a third season with the Buccaneers.

The four-time All-Pro tight end announced his retirement for the second time in three years on Tuesday. In an Instagram post, Gronkowski thanked his teammates and coaches over the years and said he’s going back to “chilling out.”

“I want to thank the whole entire first class Buccaneers organization for an amazing ride, trusting me to come back to play and help build a championship team,” Gronkowski wrote on Instagram. “I will now be going back into my retirement home, walking away from football again with my head held high knowing I gave it everything I had, good or bad, every time I stepped out on the field. The friendships and relationships I have made will last forever, and I appreciate every single one of my teammates and coaches for giving everything they had as well.”

The 33-year-old retired in 2019 after nine seasons with the Patriots, but returned in 2020 when Brady went to the Buccaneers. The close friends teamed up to help Tampa beat the Kansas City Chiefs in the Super Bowl in February 2021. Gronkowski caught two touchdown passes in that game.

“Love you as a man, teammate and friend,” Brady wrote on Gronkowski’s post. “One of a kind in every way.”

The Buccaneers and Brady were hoping Gronkowski would play another season. But Tampa prepared for his departure in the draft by selecting tight ends Cade Otton in the fourth round and Ko Kieft in the sixth round. Veteran tight end Cameron Brate also remains with the Buccaneers.

“Rob is a true professional who left it all on the field for us the past two seasons and helped establish a championship culture in our building,” Buccaneers general manager Jason Licht said in a statement. “It is always difficult to see a great player walk away from the game when he is still enjoying that kind of success, but the overwhelming emotions I feel today are gratitude and respect for one of the greatest tight ends who ever played the game.”

The fun-loving Gronkowski will be tough to replace. He was not only one of the league’s best pass-catching tight ends but also among the best blockers at his position. Gronk was known for his toughness, playing physical and through injuries.

His jovial personality made him one of the league’s most popular players and a natural for a broadcasting job.

Gronkowski’s agent, Drew Rosenhaus, told ESPN it wouldn’t surprise him if Brady called and talked him out of retirement at some point during the season. Brady himself ended a 40-day retirement in March to play his 23rd season.

But for now, Gronk has spiked his last football in an NFL game.