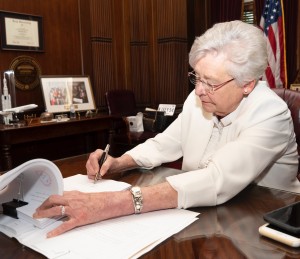 Gov. Kay Ivey has issued a response to President Biden’s request that states temporarily drop their gas tax as a way to lower prices.

Ivey made this statement:

“Alabamians and Americans alike are hurting, and it’s a real shame President Biden is failing to address the problem. Folks across our state need relief, but I do not believe that relief will come through a fuel tax suspension at the federal or state levels. In fact, as we have continued to look closely at this issue, I believe that this could cause more harm than good in Alabama, ultimately costing taxpayers.

“President Biden could not be more hard-headed on the issue of American energy independence, but he campaigned on that, so, it comes as no surprise to me. He is closing pipelines with the stroke of a pen. Here in our neck of the woods, the Gulf of Mexico is currently in a moratorium with no lease sales being held, which impacts both our oil and gas industries, as well as the Alabama consumer.

“He is pointing his finger at the oil industry and is looking anywhere else but home. There is also no certainty that Americans will feel even temporary relief from this band-aid approach. Let’s be clear: We need a permanent solution.

“The Biden Administration is seeing bad poll numbers, and they’re scrambling. This is a gimmick, plain and simple.”

Biden also wants Congress to drop the 18.4 cents-per-gallon federal gas tax for three months, as well as the 24.4 cents-a-gallon federal tax on diesel fuel. If the gas savings were fully passed along to consumers, people would save roughly 3.6% at the pump when prices are averaging about $5 a gallon nationwide.