Temperatures were off to the races again Thursday morning. Despite morning lows in the low 70s, Montgomery and Andalusia were already at or above 100° by noon. Afternoon highs range from the upper 90s to low 100s for most locations. The humidity may remain just high enough to result in heat indices above 105° for much of the afternoon. A heat advisory continues until 7PM for central Alabama. 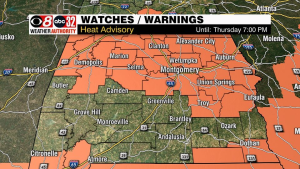 Most locations feel the extreme heat all afternoon long. However, a couple locations may receive a brief cooling shower or storm. At noon, isolated storms were developing near I-20, moving south. Some may survive long enough to produce rain in Marengo or Perry counties during the afternoon. Additional stray showers or storms cannot be ruled out, but the rain chance remains very low Thursday.

Friday features a better chance for a stray shower or storm. However, most locations remain dry, mostly sunny, and very hot. High temperatures range from the upper 90s to low 100s again. Rain chances increase a bit more this weekend. Although, Saturday may only features isolated afternoon/evening showers and storms. Temperatures remain hot, with highs in the mid to upper 90s. A couple locations may approach 100°.

Showers and storms may become more widely scattered Sunday. Temperatures *only* peak in the mid 90s in most locations during the afternoon. Daytime showers and storms remain in the forecast next week. In fact, Monday features the best rain chance over the next eight days. Models show a front pushing into the southeast. While the front doesn’t deliver direct heat or humidity relief, the increased rain chance curbs the afternoon heat.

Daytime showers and storms remain in the forecast through the rest of next week. Coverage remains widely scattered each day, so not all locations receive rain on any given day. Temperatures remain closer to normal, with highs in the low to mid 90s and lows in the low 70s.