One woman is dead — and another is behind bars — following a shooting early Thursday morning at a Dallas County manufacturing plant.

Sheriff Mike Granthum says the woman was shot and killed — in the parking lot where she worked — at around 5:45 in the morning. 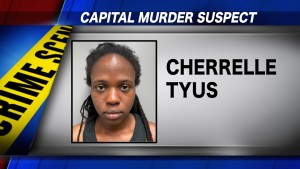 Granthum says 28 year old Kadeejia Lee of Selma was laying on the side of her car suffering from gunshot wounds — when deputies arrived on the scene.

He says video surveillance at the plant — shows Lee sitting in the parking lot waiting to start her shift — when 29 year old Cherrell Tyus pulls up beside her — gets out of her car — and starts shooting.

“She gets out of the car and just opens fire through the passenger side striking Miss Lee several times,” said Granthum. “Miss Lee was able to get out of the car and she rolled to the ground where she is now deceased due to gunshots.”

Granthum says the evidence — leads investigators to believe — that the two woman had some sort of altercation — some time before the shooting. Deputies found Tyus later near the home of a family member. She was arrested without incident — and charged with capital murder.

Granthum says Tyus could be facing more charges — pending an autopsy. She’s being held in the Dallas County Jail — without bond.