Alabama Judge Who Made Remarks Against Gov. Kay Ivey and Cursed, Is Suspended and Could Be Removed 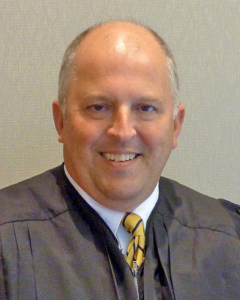 An Alabama judge who belittled Gov. Kay Ivey over her age and gender and repeatedly cursed in court has been removed from duty and could be ousted from office, records show.

Mobile County Circuit Judge James T. Patterson was suspended after the Judicial Inquiry Commission, which investigates complaints against judges, accused him of violating judicial ethics with a string of remarks about Ivey and repeated profanity in court.

A judge since 2017, Patterson is a Republican who has referred to his remarks as bad jokes.

Patterson referred to the 77-year-old Ivey as “Gov. MeMaw,” a disparaging term used by some critics, in an order complaining about her decision to make most people remain at home during the early days of the COVID-19 pandemic, the commission alleged, and he regularly used profanity while presiding over court sessions and in written orders.

Investigators said Patterson made an inappropriate remark about everyone in court being able to speak English when he saw a potential juror who appeared to be of Asian descent.

Patterson quickly apologized to the jury pool for the remark, which he called a “stupid, stupid joke,” and subsequently denied any racism in a public post on social media.

“The liberals call everyone they disagree with a racist nowadays. I am nothing of the kind,” Patterson wrote in 2019, according to the commission’s complaint. He defended his repeated use of “dead a— broke” to refer to Alabama’s underfunded court system, saying he has led the fight to increase funding.

Patterson apologized to Ivey in a letter in which he said his “Gov. MeMaw” remark “was a poor attempt at humor in the midst of this Covid-19 mess,” but continued using the term in reference to Ivey in discussions with lawyers, investigators found.

Patterson hasn’t submitted a response to the commission charges, which were filed last week and will be considered by the Court of the Judiciary. If convicted, Patterson could face penalties as severe as removal from office.