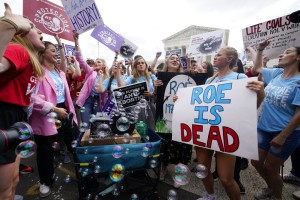 A celebration outside the Supreme Court, Friday, June 24, 2022, in Washington. The Supreme Court has ended constitutional protections for abortion that had been in place nearly 50 years — a decision by its conservative majority to overturn the court’s landmark abortion cases. (AP Photo/Steve Helber)

Alabama News Network is getting reaction to the Roe v. Wade decision, from elected leaders and from groups with ties to abortion.

“Today is a giant step forward for our country as, after decades, Roe is finally overturned. Folks, after almost 50 years of standing up for unborn babies, our prayers have been answered.

“The fight continues, though. Here in Alabama, we have been preparing for this day when the decision-making authority on abortion is rightfully returned to the states. In 2019, I was proud to sign into law the Alabama Human Life Protection Act, which is one of the strongest bans on abortion in the country. Currently, there is a halt by a federal judge on the enforcement of that law, but now that Roe is overturned, the state will immediately ask the court to strike down any legal barriers to enforcing this law. As I noted when I signed the Alabama Human Life Protection Act, every life is precious and a sacred gift from God. We will not relent in our efforts. Ensuring this 2019 law can be enforced is the next and very critical step to protecting our babies.

“This is a historic day, and I could not be more proud as a governor, a Christian and a woman to see this misguided and detrimental decision overturned.”

“As we celebrate today’s Supreme Court ruling, which overturns the abomination of Roe v. Wade and represents a significant step toward protecting unborn life, we should pause to remember and pray for the almost 64 million innocent souls that have been lost to the abortion-on-demand industry.

Alabama’s Republican Legislature has been preparing for this day, and with the nation’s strongest pro-life law already on our books along with an amendment opposing abortion cemented in our state constitution, unborn life has found a safe haven within our borders.”

“Today is a truly historic day. The United States Supreme Court has, at long last, finally overturned its fatally flawed decision in Roe v. Wade. The issue of abortion now returns to the States-and the State of Alabama has unequivocally elected to be a protector of unborn life.

“Accordingly, I wish to immediately issue the following notices:

“Because neither the United States Constitution nor the Alabama Constitution provides a right to abortion, Alabama laws that prohibit abortion and that have not been enjoined by a court are in full effect. For those laws that have been halted by courts, the State will immediately file motions to dissolve those injunctions. Any abortionist or abortion clinic operating in the State of Alabama in violation of Alabama law should immediately cease and desist operations.

“Furthermore, any act of vandalism or violence against any crisis pregnancy center, church, or other pro-life entity in retaliation for today’s decision will be prosecuted by the Attorney General’s Office to the fullest extent of the law.

“I will have more to say on Dobbs v. Jackson Women’s Health Organization and the importance of this decision in due course.”

“No abortion restrictions, even the ones pre-Roe, stopped people seeking access to abortion. The Supreme Court’s ruling has just launched our nation into chaos and placed even more pressure on a health care system that was already buckling. Let me be clear: We will not back down. No judge, no politician, no ban should ever block your personal medical decisions or set the course for someone’s health and life.”

“The 1973 Supreme Court decision in Roe v. Wade was unconstitutional, and the High Court has now reversed that decision.  It is our moral and ethical duty to protect the dignity of human life, particularly when it comes to the unborn.  Today’s decision by the Supreme Court justly upholds the writings of our Constitution and allows us to preserve innocent human life.  This is welcome news.”

“Today marks a dark day for women’s reproductive rights in the United States. With this devastating decision overturning Roe v. Wade, the Supreme Court has reversed nearly 50 years of legal precedent and stripped away a woman’s right to make her own decisions about deeply personal health care matters. Empowered by the Court, extremist politicians in state legislatures across the country will now begin racing to criminalize reproductive health care. Make no mistake, our nation’s most vulnerable women will be hit hardest by this decision.”

“From voting rights to reproductive health care, this Supreme Court has shown that it is intent on rolling back the freedoms that our foremothers and forefathers fought so hard to secure. We cannot stand by as our rights are stripped away. It is incumbent upon Congress to act!”

“Because of laws passed by our Republican legislature, abortion services will likely be illegal in Alabama – a felony that could force doctors to face up to 99 years in prison for providing medical care to their patients, even in the case of rape.

“Republican legislators and appointed judges think they should be sitting between you and your doctor while making medical decisions.

“Republican politicians will claim this is a win for “life” in a state with high infant mortality rates, a Black maternal mortality crisis, and countless other public health crises. They refuse to expand Medicaid, providing free lifesaving healthcare access to Alabama families – or do anything else that actually sanctifies life for Alabamians. Now, their law will block abortion access in Alabama, negatively affecting women with the fewest resources the most.

“While the Supreme Court has turned back the clock back decades on our freedoms – Alabama Democrats still stand strongly for Alabamians’ freedom to make their own medical decisions – especially their right to abortion.

“In the meantime, we need Democrats in Washington to act and pass laws that protect abortion access for all Americans. We need federal action now.”

“Today, the fundamental human right to life won. The U.S. Supreme Court’s decision correctly returns the issue of abortion back to the states where it belongs. Each state will now be able to determine how it will proceed on this matter.
“The Alabama Republican Party believes that every life is precious and should be protected and celebrated. I cannot communicate how excited I am about the possibility of correcting the tragedy of Roe v. Wade, and restoring the sanctity of life. It gives me hope in the ideals of individual liberty and protecting the rights of every person from the moment of conception to the grave.
“The Alabama Republican Party will continue its work with our state leaders on measures that will help expectant and new mothers, as well as the children of our state. We will also fight to cut bureaucratic red tape to make adoptions easier and more cost effective for families. We must help and protect both the born and the unborn, take care of those in need, and provide viable alternatives for those facing difficult situations. We care about and love both the mothers and the babies of our state.”

Alabama News Network will be adding new reaction to this article as we get it.