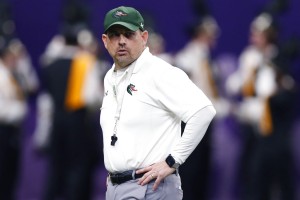 UAB head football coach Bill Clark is retiring because of chronic back problems after leading the program back from a shutdown to two Conference USA titles.

Clark announced his decision on Twitter on Friday after informing the team, saying he needed spinal fusion surgery. He turns 54 on Tuesday.

“I have reached this difficult decision after consultation with a number of world-class medical experts and much family discussion, reflection and prayer,” Clark said in the statement posted on social media. “Having undergone a previous back surgery, extensive physical therapy, shots and chiropractic therapy, I have exhausted all of my options.

“Due to the extreme physical demands placed on a head coach, it is clear to me. It’s time to pass the torch and try and get well.”

Offensive coordinator Bryant Vincent was promoted to interim coach, with defensive coordinator David Reeves serving as assistant head coach. The Blazers are moving to the American Athletic Conference starting with the 2023 season.

Clark stayed at UAB during the shutdown that sidelined the Blazers through two seasons. UAB, which started playing at the new Protective Stadium in 2021, won a school FBS record eight games when it returned for the 2017 season, making its first bowl appearance in 13 years.

Clark was named the Eddie Robinson Coach of the Year in 2018 after leading UAB to 11 wins and its first C-USA title. The Blazers beat No. 13 BYU in the Independence Bowl last season, the highest-ranked team they have defeated.

Clark, who said he was still weighing the decision on his future as late as Thursday night, didn’t rule out a return to coaching after recovering from surgery.

Clark, who is hoping to be recovered by December, said he would still be around the program and support the players. “I just won’t be out on that field with them,” he said.

Earlier in his career, Clark spent nine years as head coach at Prattville, where he won a pair of Class 6A State Championships as his last two teams won 30 straight games, while the 2007 squad was ranked No. 2 in USA Today’s national high school poll.

Following his final season at Prattville, he was named the Alabama High School Athletic Association Coach of the Year and was also selected as the Schutt Southeast Regional Coach of the Year.

He first led the Lions to the Class 6A state playoffs in 2000, his second season guiding the program. Clark earned his first postseason victory a year later, helping Prattville advance to the quarterfinals.

Prattville made its first state championship game appearance under Clark in 2004, with the team allowing three touchdowns in four postseason contests, including a pair of shutouts. The Lions advanced to the quarterfinals of the 2005 playoffs before dropping a two-point decision.

Clark posted a 107-11 overall record during his tenure (90.7 percent) at Prattville.