Catch a Tagged Amberjack in The Gulf of Mexico, Get $250 Reward 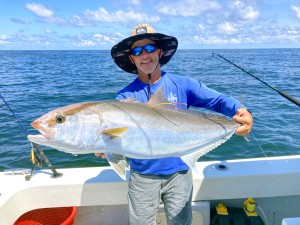 Scientists are trying to get a better estimate of greater amberjack populations in the South Atlantic and the Gulf of Mexico, and this means the chance at a $250 catch for anglers.

Although the popular sport and table fish are not overfished in the South Atlantic, they are in the Gulf of Mexico, according to the National Oceanic and Atmospheric Administration’s fisheries division.

“Understanding how these two separately managed stocks are connected is vital for enacting proper management guidelines,” according to a news release from the University of South Alabama.

Greater amberjack are big silver fish named for the long amber line along each side from nose to first dorsal fin. They can grow up to 6 feet (1.8 meters) long and 200 pounds (90 kilograms), though up to 40 pounds (18 kilograms) is most common, according to NOAA Fisheries.

As part of the Greater Amberjack Count, scientists led by Dr. Sean Powers of the University of South Alabama plan to tag 750 greater amberjack with yellow-and-red plastic tags.

Anglers who catch one can clip off the tag or tags, call the phone number on one side of the tag to report the catch, size, location and other details, and mail the tag or tags to the address on the other side to get the reward. The tag number — AJ followed by five digits — is on both sides. 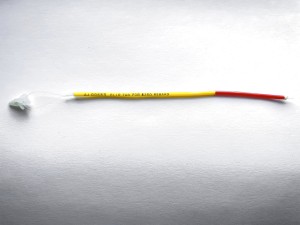 This photo taken by Mississippi State University assistant extension professor Marcus Drymon shows the type of tag being attached to 750 greater amberjack to be released offshore the summer of 2022 from Texas to North Carolina as part of a population study. Each bears a unique five-digit number and a telephone number to call to claim a $250 reward. (Marcus Drymon/Mississippi State University via AP)

The study is similar to the Great Red Snapper Count, which estimated last year that there appear to be about 110 million adult red snapper in the Gulf of Mexico. That’s about triple the previous federal estimate.

Some of the fish will have two external tags, to give scientists a better idea of how many tags fall off of fish. And 450 of the externally tagged fish also will have surgically implanted acoustic tags. Those fish will be released off of states from North Carolina to Texas for a better understanding of movement patterns.

The South Atlantic greater amberjack recreational fishing season is currently open. The Gulf of Mexico season is currently closed, but anglers who catch one there should weigh and measure it and cut off the tags before releasing it. The same procedure should be used for tagged fish too small to keep in either area.

Congress provided $5 million each to NOAA Fisheries and the National Sea Grant College Program for the study. Another $2.7 million in matching funds come from the 13 institutions where the 18 scientists work, including Auburn University, Texas A&M University and Louisiana State University and the University of South Florida. Also involved are Sea Grant programs from several states ranging from North Carolina to Texas.

“The success of the conventional tagging study critically depends on participation from fishermen of all sectors,” according to the news release.