A Pine Hill city councilman is facing a menacing charge — after allegedly pulling out a knife — during a heated council meeting.

Brenda Blount of Pine Hill — says she and Councilman Donnie Calhoun began name calling and arguing back and forth — at the city council’s monthly meeting.

She says Calhoun was upset — about an interview she’d done with Alabama News Network — voicing her concerns about the future of the police department — after Calhoun raised the idea of shutting it down. 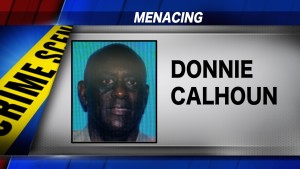 “Then another councilman told him, “Well, I was on the news too.” And he told him he was an idiot or something like that. I’m not really sure. And it went from there,” said Blount.

Edith Ruffin with Pine Hill Mission Food Bank — was also at the council meeting — when the incident went down.

Calhoun was later arrested. And he’s now facing a menacing charge. His attorney Par Gilmore of Selma — issued this statement.

“That was a disgrace really. That should have never happened,” said Ruffin.

“We can’t say what Mr. Calhoun or anyone else will do, or not do. It was very dangerous. And it should not have gotten that far.”

A court date for the preliminary hearing in the case — has not yet been set.