RINSE AND REPEAT: Little change in the day to day forecast for Alabama this time of year. The days are very warm and muggy, with highs ranging from the mid 80s to lower 90s. We are seeing a mix of sun and clouds, and during the afternoon, rain and storms develop randomly across the Alabama landscape. Though rain and storms are possible at anytime, the greatest coverage will come between 1PM and 10PM. The chance of any one spot getting wet each day is 40-60 percent, it won’t rain everywhere every day, but many places stand a good chance of seeing several downpours during the next several days.

Summer storms can pack a punch; the main issue is lightning. Also, they can produce tropical downpours which can lead to areas of isolated flash flooding, plus it is not entirely out of the question to have a few severe storms along the way this week, with gusty winds the main threat. This time of year, it is almost impossible to know exactly when and where storms will occur, you just have to watch radar trends through the day.

FOURTH OF JULY WEEKEND: The weather won’t change much over the long holiday weekend. You will see some sun at times Saturday, Sunday, and Monday, but from time to time a passing shower or storm is likely, especially during the afternoon and evening hours. Highs will be mostly in the upper 80s to lower 90s. Again, be prepared to dodge raindrops along the way, but it will be no “weekend washout”

REST OF NEXT WEEK: The upper ridge will remain mostly west of Alabama, but we can expect afternoon highs to return to the low to mid 90s by the middle of the week. Expect partly sunny days, with scattered, mainly afternoon and evening storms. 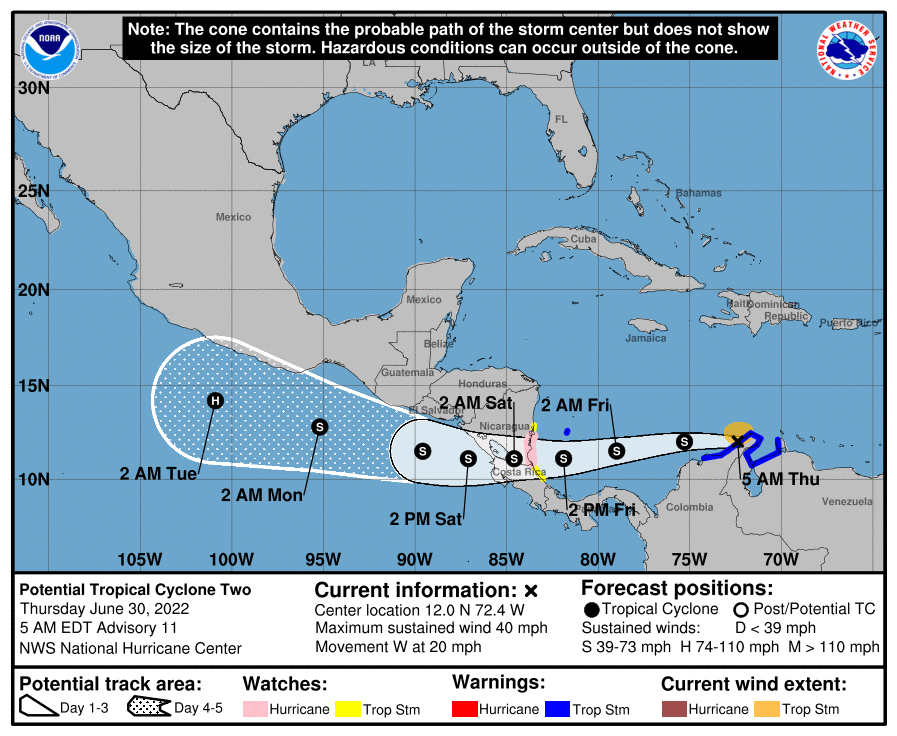 STILL WAITING ON BONNIE: Potential Tropical Cyclone Two was centered near latitude 12.0 North, longitude 72.4 West. The system is moving toward the west near 20 mph, and this fast motion is expected to continue through tonight. Some decrease in forward speed with a continued motion toward the west is forecast on Friday and Saturday. On the forecast track, the system will move across the southwestern Caribbean Sea today through Friday, cross southern Nicaragua or northern Costa Rica Friday night, and emerge over the eastern Pacific Ocean on Saturday.

Maximum sustained winds are near 40 mph with higher gusts. Some strengthening is forecast through Friday while the system is approaching Central America. Weakening is expected while the system cross Central America, but restrengthening is forecast on Saturday once it moves over the Pacific Ocean. Conditions appear conducive for development, and the disturbance is expected become a tropical storm while slowing down over the southwestern Caribbean Sea.
Formation chance through 5 days…high…90 percent.

Tropical-storm-force winds extend outward up to 80 miles to the north of the center. The estimated minimum central pressure is 1009 mb (29.80 inches).
We note, if the system crosses into the Pacific Ocean after landfall in Central America, it will get a new name…likely Darby. 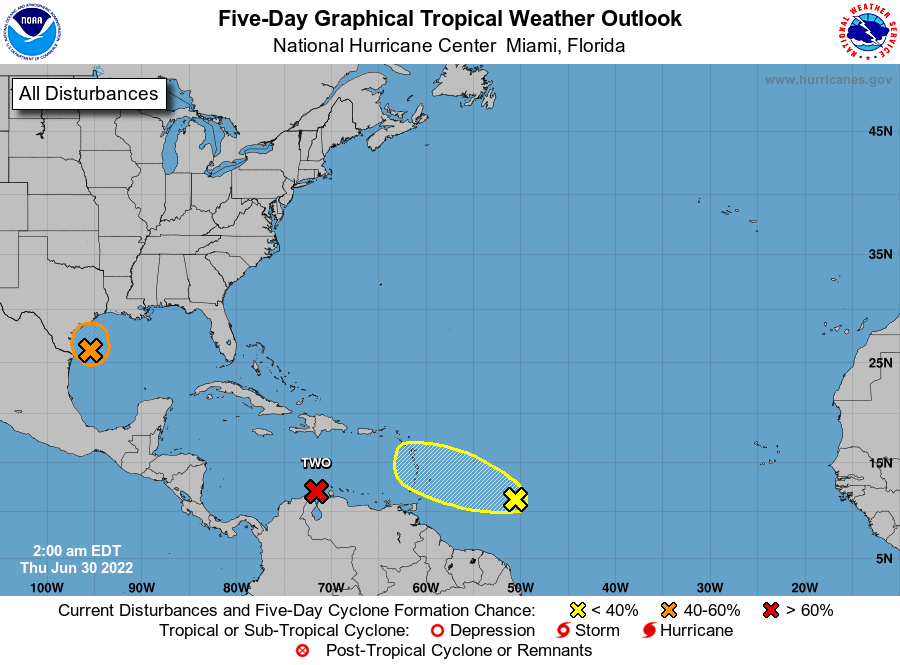 ELSEWHERE IN THE TROPICS: Shower and thunderstorm activity remains poorly organized with an area of low pressure located over the western Gulf of Mexico. This system is forecast to move slowly westward and approach the coast of southern Texas and northern Mexico later today. Some slow development is still possible, and it could still become a short-lived tropical depression near the coast before it turns northwestward and moves inland over Texas later today. Regardless of development, heavy rain will be possible along portions of the Texas coast for the next few days. For more information about the potential for heavy rain, please see products issued by your National Weather Service office. Formation chance through 5 days…medium…40 percent.

Also, a tropical wave located over the western tropical Atlantic continues to produce disorganized showers and thunderstorms. Only slight additional development of this system is anticipated while it moves west-northwestward for the next several days. The wave is forecast to move over the Windward Islands late Friday or early Saturday and then over the eastern Caribbean Sea by the weekend, where further development is unlikely due to unfavorable environmental conditions. Formation chance through 5 days…low…10 percent.

The next two names up are Colin and Danielle.

Have an incredible Thursday!!!
Ryan