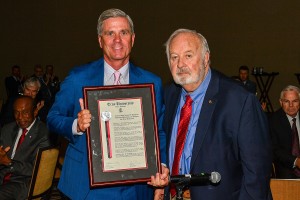 Troy University Board of Trustees President Pro-Tem Gibson Vance presented a resolution commending State Sen. Jimmy Holley (R-Elba) for his service to the University and the State of Alabama during a luncheon in his honor in Montgomery on Thursday, June 30, 2022. (Troy photo/Joey Meredith)

Troy University’s Board of Trustees has honored State Sen. Jimmy Holley (R-Elba), who is retiring later this year.

Holley, who retires from the Alabama Senate in November with nearly a half-century of service in the Legislature, has represented Pike, Covington, Coffee and Dale counties in the Senate for six terms and served from 1974 – 1994 in the State House of Representatives.

“There are a lot of simple lessons that I have observed from Sen. Holley over the years and two of those are very clear. One of those is the power of servant leadership. That element of service and loyalty runs so deep in Sen. Holley and always has. He always gave at least what was expected of him, during his time at Troy and during his time as a public servant,” said Troy Chancellor Dr. Jack Hawkins, Jr.

In addition to his Legislative service, Holley served Troy University as an administrator from 1984 until 2007, retiring as Director of the Regional Inservice Center and as Assistant to the Vice Chancellor, as well as prior service as Director of the Center for Developmental Education.

Outside of his public service, Holley is a cattle farmer and small businessman. Among Holley’s accomplishments are securing infrastructure improvements in support of Fort Rucker, quality of life improvements for the communities he served and worked to expand both education funding and high-speed internet access. He was also deeply involved in the support of workforce development and is credited with helping to establish the Alabama Aviation College in Ozark.

During its meeting on Thursday, June 29, the Trustees approved a resolution honoring Holley and presented him a framed copy of it and a Troy University giclée print during a luncheon in his honor. Troy University First Lady Janice Hawkins presented Holley’s wife, Mary, a Troy afgan as a token of appreciation for her role in supporting the University.

“I’m so appreciative of the friends I’ve made over the years. Troy University has been a mainstay in southeast Alabama and what a footprint it has developed as an institution,” Holley said.  “There are many things that have gone before me and come after me that have helped to make this such a beautiful university and a beautiful campus, and most of all Troy University has great people. I am very appreciative of the kind words that have been said about me today.”