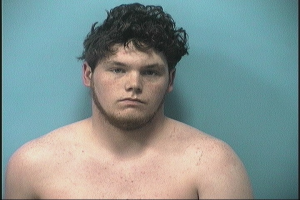 Johnson was shot on June 29 and died the following day at UAB Medical Center. He and investigator Chris Poole were shot on Highway 25 in the Cahaba River Wildlife Management Area in the Brierfield area during the pursuit of a stolen vehicle. Poole was treated and released.

The suspect, 26-year-old Austin Patrick Hall, was later arrested in Brierfield after a large manhunt that involved many agencies.

“In the days since the death of Bibb County Deputy Sheriff Brad Johnson, my office has undertaken a thorough review of the circumstances surrounding the Bibb County shooter’s release from custody.

“The shooter’s first encounter with the law came in 2016 as a result of theft and burglary charges, for which he was placed on probation. During his probationary period, he was arrested on nine new charges of theft and burglary. Pursuant to a plea deal, he pleaded guilty to a charge of second-degree theft and was sentenced in 2018 to nine years and nine months imprisonment in the Department of Corrections, likely due to his criminal history.

“In 2019, while on work release with the Department of Corrections, the shooter escaped from custody and fled across state lines. He was recaptured shortly thereafter. Despite this, after serving less than four years of his sentence, the shooter was awarded correctional incentive time (good time), which was (and inexplicably remains) permissible under the state’s ultra-lenient incentive time law. The shooter ended his sentence on April 8, 2022, and was fully released from the Department of Corrections’ custody and supervision.

“Days after his release from state custody, the shooter bonded out of jail on 10 new charges in Calhoun County and 12 new charges in Chilton County-including charges of assaulting a police officer and illegally possessing a firearm. In both counties, his bond was set in keeping with the recommended fee range. After he made bond, the shooter walked free to await his trial.

“As was the case with the death of Sergeant Nick Risner last fall, this tragedy requires that we reassess the state laws and policies that abetted this shooter in the death of Deputy Brad Johnson. The People of Alabama have heard me say many times before that Alabama’s Correctional Incentive Time laws are broken. Had the shooter served his entire sentence, he would not have been able to commit his brazen crime spree across our State, which ended in capital murder. Furthermore, an inmate who escapes custody should never, under any circumstance, be rewarded with early release.

“As I said last week, Alabama’s justice system failed the Bibb County Sheriff’s Office and Deputy Brad Johnson. I stand ready to partner with the Alabama Legislature to correct these deficiencies at the earliest opportunity and will continue to fight against any effort to further weaken Alabama’s criminal justice system.”

The funeral for Deputy Johnson will be Friday.