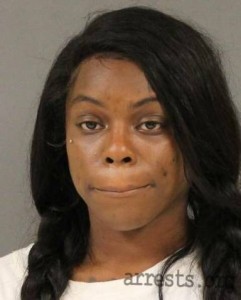 Today at about 4:00 p.m., an anonymous caller reached out to Central Alabama CrimeStoppers to say they had just had contact with Thurman.

CrimeStoppers officials say they were able to confirm that Montgomery police and U.S. Marshals were en route. The caller stayed on the line, keeping Thurman in sight until two Montgomery patrol units arrived, placing her in custody.

Thurman was taken into custody in a parking lot located off I-65 in Hope Hull. The caller is being offered a reward from CrimeStoppers.

Yesterday at approximately 2:18 am, investigators say Thurman maneuvered her way over a recreational fence to make her escape from the Lowndes County Jail. She was being held for the Choctaw County Sheriff’s Office pending her trial for capital murder.

No other information was released.