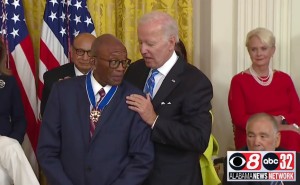 Pioneering civil rights attorney Fred Gray has released a statement upon being awarded the Presidential Medal of Freedom at the White House.

Gray and 16 others received the medal from President Joe Biden, which is the nation’s highest civilian award.

Gray has represented Rosa Parks, Dr. Martin Luther King, Jr., and others in a career that helped change the nation.

Gray is 91 and still practices law from his office in Tuskegee.

Here is the statement from Gray:

“I want to thank President Joseph R. Biden for awarding me the Presidential Medal of Freedom, indeed a high honor for which I am most appreciative. Thanks to Congresswoman Terri Sewell (AL-07) for nominating me for this award. Thanks to the many organizations and persons from all walks of life who sent communication to the President requesting that he bestow this honor.

“This award means a great deal to me, an African American civil rights lawyer who was born in the ghettos of Montgomery, Alabama. It speaks volumes to Civil Rights workers who have devoted their talents and resources toward improving the quality of life of Americans in this country; and it speaks directly to African Americans in general.

“When I filed the various civil rights cases from 1955 to date, I was concerned about African Americans receiving the same constitutional rights as all other Americans. We have made substantial progress but the struggle for the elimination of racism and for equal justice continues.

“I hope this award will encourage other Americans to do what they can to complete the task so that all American citizens will be treated the same, equally and fairly, in accordance with the Constitution. I never thought about receiving any type award, not to mention this this award.

“Honored, because when I was growing up I never dreamed of being in the White House, not to mention receiving this high honor.

“I am APPRECIATIVE FOR THIS HONOR because it comes late in my life at age 91. However, as my client Herman Shaw, one of the participants in the Tuskegee Syphilis Study, stated at the Presidential Apology at the White House on May 16, 1997, “It is never too late to work to restore faith and trust”.

“I HUMBLY ACCEPT this award on behalf of all those clients, who during the past 67 years trusted me to handle their legal cases. Many of those cases resulted in breaking down the walls of segregation and changing the landscape in America. I particularly accept the tribute on behalf of the unknown clients – persons like Claudette Colvin – the 15-year old girl, who nine months before Rosa Parks, did the same that Mrs. Parks did.

“I also accept it on behalf of the following:

a) The 623 men in the infamous Tuskegee Syphilis Study, where the federal government withheld medical treatment for those who had syphilis. The Tuskegee History Center, also known as Tuskegee Human and Civil Rights Multicultural Center, located in Tuskegee, Alabama is a permanent memorial to them. Please visit and support the Center.

b)Persons unknown who marched from Selma to Montgomery with Congressman John Lewis to bring about the Voting Rights Act of 1965.

c) On behalf of all the persons who participated in the sit-ins, Freedom Rides, Freedom Walks, all designed to demonstrate injustices in our country; many of which have now been changed as a result of the cases I had the privilege of filing for them.

d) On behalf of all those students who have been able to get a quality education on a non-segregated basis by the lawsuits I filed in Alabama.

e) Finally, I accept this award on behalf of the many men and women who were inspired in their own way to help solve problems in their communities as they existed; such as Black Lives Matter and many others. Because of what they saw others do in the Civil Rights Movement, they were encouraged to step forward and are determined to continue the fight against racism and for equal justice for all.

“So, it is with DEEP HUMILITY that I accept this award on behalf of all those unknown heroes and clients whose names never appear in print media and whose faces never appear on television. These are the persons that laid the foundation so that the President has honored me.

“Let me share with you what Congressman John Lewis, another Alabamian who received this award, told with me in a conversation a few days before his death in 2020. I asked him, considering your long, superb civil rights record, “what do you want me to do?” He said “brother, keep going, keep pushing and keep the record straight”.

“So, I say to all who are interested in civil rights: we must keep going, keep pushing, set the record straight and complete the task of eliminating racism and inequality. We must do it in a nonviolent manner, until justice rolls down like water and righteousness like a mighty stream.”