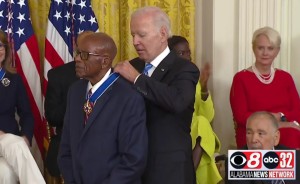 Legendary civil rights attorney Fred Gray and 16 others have received the Presidential Medal of Freedom at the White House.

Gray is internationally known for having represented Rosa Parks, Dr. Martin Luther King, Jr., and others in a career that helped change the nation.

Gray, who is 91 and still practices law from his office in Tuskegee, was nominated by Alabama Congresswoman Terri Sewell.

The Presidential Medal of Freedom is the highest civilian honor in the U.S.

See the entire ceremony below. Fast-forward to 44:40 to see President Biden award the medal to Gray.