Mourners remembered Bibb County Sheriff’s Deputy Brad Johnson, who was shot and killed by a fleeing suspect, as a hero at his funeral Friday.

Johnson, 32, died June 30, a day after being shot. Another deputy was shot and injured, but survived. 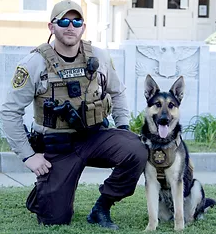 “It’s been said a coward dies a thousand deaths; a hero, but one. Brad Johnson was a hero,” Bibb County Sheriff Jody Wade said at the service, which was held at the University of Montevallo.

Johnson, the father of two daughters, was killed ahead of his upcoming wedding, which was scheduled to be held soon in Florida, his father said.

Scott Singer, who watched the funeral procession, said, “When something terrible like this happens, we just have to come out and show our support, not just for the family, but the thin blue line, the police, the fire, everyone.”

“It’s horrible because he chose to do this to protect us. He lost his life, the kids lost their dad, somebody lost their son,” Kasie Tate of Montevallo said.

“Hold your loved ones close, because you never know when it will be their last time to see you,” Johnson’s father, Steven Johnson, said during the service.

Johnson had joined the sheriff’s office in 2014 and became a canine handler. His K9, Bodie, was walked to the flag-draped casket and sat by family members during the memorial service.

Johnson was buried in Centreville.

Poole said he wants the opportunity to face the man who shot them and ask why he did it in court.

Austin Hall, 26, is charged with capital murder in Johnson’s death and attempted murder in the shooting of Poole. The shooting happened June 29 on Highway 25 in the Cahaba River Wildlife Management Area in the Brierfield area during the pursuit of a stolen vehicle.

According to the Attorney General’s office, Hall has a lengthy criminal history that dates back to 2016.