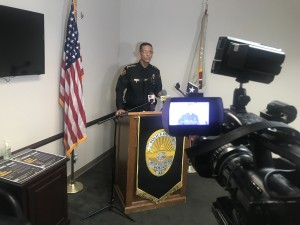 This weekend, there were nine shootings. Five of them happened in the span of less than 90 minutes. Two happened in the same location on Patton Avenue, but were not related, according to Albert.

Albert says there have been 36 homicides in Montgomery year-to-date, with arrests in 26 of the cases. He says there are leads in eight of the 10 remaining cases.

He says overall, crime in Montgomery is down 17.97%, which has been documented in a report that is sent to the FBI. Albert says crime is down in 10 of 12 categories. The exceptions are aggravated assault and home burglaries.

Albert points to Operation Washout, which was conducted with the U.S. Marshal’s Service. It led to 95 arrests involving 112 charges. In addition, he says 39 guns were seized, with 21 of them being submitted to the ATF for federal prosecution.