Artistic Director Rick Dildine and Executive Director Todd Schmidt have announced the 2022-2023 Festival Season at Alabama Shakespeare Festival, which features six productions illuminating humanity through stories of transformation — effected on and by individuals and the world around them. In its 51st season, ASF continues its mission of building community by engaging, entertaining, and inspiring people with transformative theatrical performances and compelling educational and community programs.

“This upcoming season includes something for everyone,” said ASF Artistic Director Rick Dildine. “As we put together this slate of shows, we considered the diversity of our region; all with the goal of fulfilling our mission to build community.”

“Each production responds to our commitment to transformative theatre,” said Dildine. “All humans have the capacity for transformation, and each of these stories speaks to an aspect of change. The transformative power of music will play a particularly integral role in this season’s slate.” 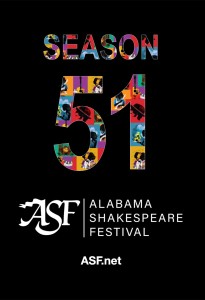 A holiday celebration kicks off the season with It’s a Wonderful Life: A Live Radio Play, a whimsical take on a classic Christmas story. The new year begins with a joyful noise as the a cappella musical Jubilee takes the Festival Stage, followed by William Shakespeare’s The Tempest, directed by Rick Dildine and starring ASF favorite Greta Lambert. The season continues as music legends Elvis, Johnny Cash, Jerry Lee Lewis and Carl Perkins come together in a jam session for the ages in Million Dollar Quartet, followed by the Tony-nominated comedy Clyde’s about workers in a diner learning to find normalcy after incarceration. Concluding the season is Kander and Ebb’s Jazz Age-inspired musical, Cabaret.

ASF will continue to offer opportunities for the community to further engage with theatre through Schoolfest performances — matinees during school hours featuring talk-backs with the cast — as well as Insights, which provide a deep-dive with experts that offer behind-the-scenes knowledge to enhance the theatrical experience.

Town Halls at Kress will connect the works being brought to ASF stages with timely topics in the community through panels and open discussion. The Southern Writers Festival will also be entering its 22nd year of developing new work about the South.

Subscriptions are on sale now at ASF.net or by calling the ASF Box Office at 334-271-5353. Single tickets will go on sale for all season productions on September 1.

This beloved American holiday classic comes to captivating life as a live 1940s radio broadcast. With the help of an ensemble that brings a few dozen characters to the stage, the story of idealistic George Bailey unfolds as he considers the impact of his life one fateful Christmas Eve. Kate Bergstrom will make her directorial debut leading a cast of five actors who will use sound effects, singing, and quick character changes to bring to life this iconic American story. This production is perfect for all ages.

“A known showman” with a “gift for stirring theatricality,” playwright and director Tazewell Thompson brings an innovative and heart-stirring score to life with this inspirational a cappella tribute inspired by real life. The world-renowned Fisk Jubilee Singers shattered racial barriers in the U.S. and abroad, entertaining kings and queens. For more than 150 years, the bold a cappella African American ensemble born on the campus of one of the nation’s premiere HBCUs has blended their rich voices together to share a heritage of suffering, strength and endurance. Under the musical direction of Alabama State University’s Dr. Joel Jones, this production features uplifting spirituals and hymns including “Wade in the Water,” “Ain’t That Good News,” “Swing Low, Sweet Chariot” and “Nobody Knows the Trouble I’ve Seen.” This a cappella performance with more than three dozen songs is sure to ignite audiences of every generation.

Shakespeare’s final play is a story of adventure, magic, music, and forgiveness. Prospero has been exiled on an island with his daughter for more than a decade when he conjures a storm that crashes his enemies on the island in a violent shipwreck. What follows is a story that asks, “How do we forgive and move on after we have been harmed?” Rick Dildine directs, and ASF alumnus Greta Lambert stars as Prospero.

On December 4, 1956, a twist of fate brought together Johnny Cash, Jerry Lee Lewis, Carl Perkins, and Elvis Presley at Sun Records in Memphis, TN. Million Dollar Quartet is a celebration of the contagious spirit, freewheeling excitement, and thrilling sounds of the once-in-a-lifetime event where four of music’s best talents came together. This is a rocking night of classic music!

Creating the perfect sandwich is the shared quest of the formerly incarcerated kitchen staff of Clyde’s, a truck stop cafe. Even as the shop’s mischievous owner tries to keep them under her thumb, the staffers are given purpose and permission to dream — finding that “sometimes a hero is more than a sandwich.” From two-time Pulitzer Prize winner Lynn Nottage, this Tony-nominated hit from Broadway is full of laughs and insights into what it means to find your purpose. Clyde’s will be produced in partnership with the Equal Justice Initiative and Arkansas Repertory Theatre.

One of the most famous American musicals of all time — from the creators of Chicago — Cabaret takes us to 1929 Berlin during the twilight of the Jazz Age as the Nazis are ascending to power. This groundbreaking musical focuses on the nightlife at the seedy Kit Kat Klub and revolves around American writer Clifford Bradshaw and the English cabaret performer Sally Bowles. Based on the writings of Christopher Isherwood and winner of Tony Awards and Oscars, Cabaret will offer our audiences a transformative theatrical experience unlike anything they’ve ever witnessed.

Alabama Shakespeare Festival, the State’s theater, builds community by engaging, entertaining, and inspiring people with transformative theatrical performances and compelling educational and community programs. From its founding in a high school auditorium in Anniston in 1972 to its designation as the State Theater of Alabama in 1977 to the stunning $21.5 million performing arts complex in Montgomery (built in 1985), ASF has been a leader in the performing arts throughout the state, region, and country. As a beloved Alabama arts institution, ASF broadens the cultural identity of the South by producing classics, Shakespeare, contemporary plays, musicals, theatre for young audiences, and exciting new works. Since its inception, ASF has provided education programs to more than one million students through its SchoolFest student-matinee program, which presents high-quality theatrical experiences to some 35,000 students annually. More at ASF.net.