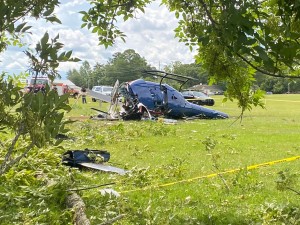 A medical helicopter has crashed in Andalusia while on the way to pick up a patient.

Covington County Sheriff Blake Turman tells Alabama News Network the crash happened just after 3PM. The helicopter had been on the way to the hospital in Andalusia when it went down.

The crash happened in the 400 block of Snowden Drive in Dean’s Field, across from Dean’s Cake House.

Turman says three people were on board: the pilot and two EMTs.

Two victims were taken by ambulance to Andalusia Health, where one was treated and released and the second was airlifted from there to Sacred Heart Hospital in Pensacola, Florida. A third was airlifted from the scene and also is being treated at Sacred Heart. The extent of their injuries is not known, according to Andalusia Police Chief Paul Hudson.

No one on the ground was injured. Five power poles were knocked down when the chopper went down.

Investigators from the Federal Aviation Administration have arrived at Packer Field in Andalusia.

Those inspections will not happen until Saturday afternoon.

The downed helicopter was an emergency vehicle and not the Friends of Army Aviation U1-H1 “Huey” that had been giving rides in the opposite corner of the same field earlier in the day.

The portion of Packer Field where the crash occurred will remain secured until the investigation is complete. Members of the Covington County Sheriff’s Reserves are providing assistance securing the scene.

Packer Avenue will reopen as soon as City of Andalusia Utilities completes the process of replacing the five power poles that were broken or damaged by the crash.