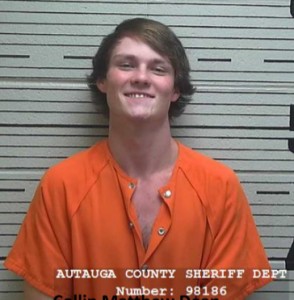 Prattville police say a theft suspect has been arrested after a chase that ended in Millbrook.

Police say they have been working on several felony cases involving 21-year-old Collin Dean of Prattville over recent weeks. They considered him armed and dangerous.

This afternoon around 4PM, they spotted Dean in a pickup truck in a shopping center parking lot. But they say when they tried to stop him around Rocky Mount Road, he refused to stop and led officers on a chase that went into Millbrook on Alabama Highway 14 and then onto Deatsville Highway.

Police say they used spike strips, which caused Dean to wreck around County Roads 40 and 85 where he was taken into custody. Officers say a woman was with Dean in the pickup truck and they are investigating her possible involvement.

Police say during the chase, Dean caused a wreck in Prattville and another in Millbrook. ALEA is investigating both of them.

Dean was arrested on a felony theft 1st offense with other charges pending. Current bond is set at $30,000.