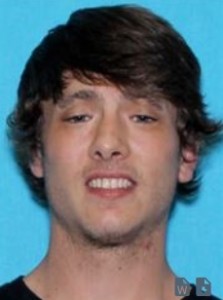 A Montgomery man is charged with leading police on a high-speed chase in a stolen car that stretched from Millbrook to Clanton.

Millbrook Police Chief P.K. Johnson says that just after 5PM Sunday, they got a report that a stolen BMW might be in their area. A short time later, a police officer saw the car on Coosada Parkway near Caroline Drive.

Johnson says the driver stopped momentarily, but sped off when the officer got out of his patrol vehicle. The driver took several street before getting onto I-65 northbound, reaching speeds of more than 100 mph, according to Johnson.

Johnson says the driver got off the interstate at Exit 205 in Clanton, then eventually stopped in the 2500 block of U.S. Highway 31.

That’s where Johnson says 27-year-old Chase Hanger of Montgomery and a female passenger were detained.

Johnson says Hanger said he had intentionally ingested narcotics to avoid prosecution, just before stopping the car. He was taken to a medical facility as a precaution.

After being medically cleared, Hanger was arrested, charged with receiving stolen property, attempting to elude and several traffic violations. He was taken to the Elmore County Jail and is being held on a $36,000 bond. Hanger is also wanted on multiple felony warrants in Shelby County.

“At some point, our state legislators need to look at making fleeing from law enforcement a felony,” Johnson said in a statement.

“This kind of willful disregard for human life needs to be treated as such. It makes me physically ill that this individual attempted to elude law enforcement officers in a stolen vehicle, placing countless lives in danger, and he has a bond of only $36,000.

“That being said, at least we can take comfort that he has business with the Shelby County Sheriff’s Office, at such time that he’s released on our charges. If I remember correctly, I don’t recall seeing a bond associated with those charges.”