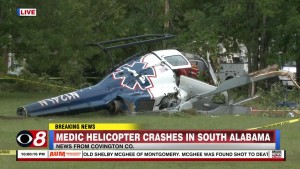 The National Transportation Safety Board has released its preliminary report on last month’s medical helicopter crash in Andalusia that left two of the three people on board with serious injuries.

As Alabama News Network has reported, the Eurocenter AS 350 helicopter was from the Life Saver program in Evergreen and had been flying from Evergreen to Andalusia Health Hospital in Andalusia to pick up a patient on Friday, July 29. It went down in Packer Field, across from Dean’s Cake House just after 3PM.

According to the report, the pilot said in a post-crash interview that he felt sweaty and clammy toward the end of the flight but was not lightheaded and did not experience vertigo. The report says he remembered someone telling him to “pull up” three times and then remembered being in an ambulance.

The report says the flight paramedic said in a post-crash interview that the helicopter seemed low as it was approaching the hospital helipad, which was still one mile away. A short time later, the paramedic said the flight nurse made a mayday call, shook the pilot’s seat, telling him to pull up three times. The helicopter nosed up, made a left turn and crashed into the field on its right side.

The NTSB says the flight nurse was critically hurt and could not provide a statement.

The three people on board the helicopter have not been named.

The NTSB says eyewitnesses also saw the helicopter go nose up, turn left and hit trees, powerlines and the ground. The path of debris was about 100 feet long.