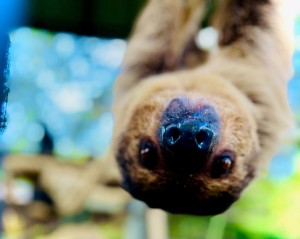 The 4-year-old sloth named Odysseus originally came from Ark Encounter in Kentucky. Odysseus was displayed at the zoo on Tuesday and is now ready to slowly welcome visitors to the zoo.

Gabrielle Jansen, the Marketing and PR Manager at the Montgomery Zoo, said that Odysseus has become very popular in the short amount of time he has been at the zoo.

“Just people in general being really excited that we brought a sloth,” stated Jansen. “We knew bringing in one he was gonna be super popular because most zookeepers, visitors, everyone loves a sloth. They’re adorable, they’re slow, and they contribute a lot more to the environment than you would  actually know.”

Odysseus will be moved permanently to the Lemur’s old enclosure while they are moved to their new one as well.