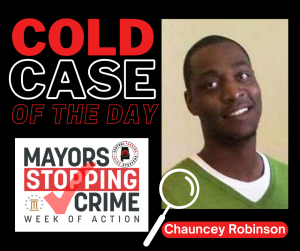 Central Alabama CrimeStoppers has announced the murder of Chauncey Robinson as its “Cold Case of the Day.” It’s a part of Montgomery Mayor Steven Reed’s “Week of Action” against violent crime.

A $5,000 reward is being offered to help solve the killing of Robinson, who was 34 years old when he was shot.

On Sunday, September 18, 2016, at about 7:50 p.m., Montgomery Police responded to 37 Judge C. Price Street in reference to a person shot. That’s where they found Robinson, who later died of his injuries.

The investigation is now in the hands of the Montgomery District Attorney’s Cold Case Task
Force. Investigators are requesting information from anyone that may have information to help
solve this case. All tips are kept anonymous through Central Alabama CrimeStoppers.

If you have information that could help solve this killing, call CrimeStoppers at (334) 215-STOP.