A Uniontown couple claims a leaky bathtub in their apartment is causing major safety and health concerns — for their family.

Michael Pope and Jenae Honorable — and their four children — live in a public housing unit in Uniontown. The couple says — every time anyone uses the bathtub — water leaks from underneath it. 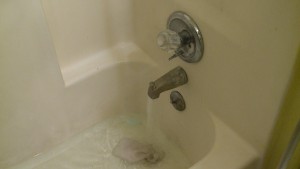 “I’ve been begging the housing authority to come out and fix these leaks. And stop this water from running in all my kids rooms,” said Pope.

“Under the Fair Housing Act, I don’t know all the rules but, I know for a fact that this is not liveable for us. A family that stays in low income housing,” said Honorable.

They say the leaking water damages the floors, the walls — and their furniture. But most importantly — they say it’s causing mold.

“At night time it’s so strong that I had to move my kids to another room. Cause, it stopped they breathing,” said Pope.

“My kids they deal with allergies. So, they’re constantly sneezing,” said Honorable. 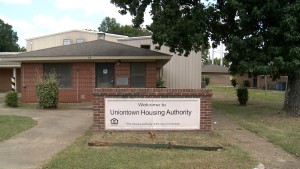 The couple says they’ve been dealing with the issue for several months now. But when their children started getting sick — the situation went from just being a nuisance — to being a serious health concern.

“This my family and I love them. And I’m going to protect them all I can,” said Pope.

Officials at Uniontown Housing Authority declined to comment on the matter under the advice of legal counsel.