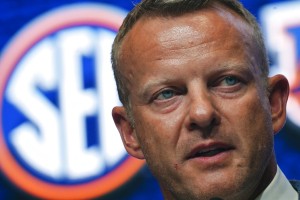 Auburn head football coach Bryan Harsin started fall camp with a bit of fun, filming a Top Gun-style video with the quarterbacks. All indicated that they felt they could “be the best of the best.”

“That’s pretty arrogant, considering the kind of competition that we’re going to play,” Harsin says in the video produced by the athletic department. “I like that in a quarterback.”

Harsin and the Tigers are looking for some renewed swagger, and improved quarterback play, as they try to halt a five-game losing streak and put offseason issues behind them. The mission is daunting for a team picked to finish last in the Southeastern Conference Western Division.

Harsin’s job security came into question amid a school investigation after an exodus of players — including starting quarterback Bo Nix — and assistants. Now, Harsin seeks silver linings from the ordeal, saying it brought the remaining players closer together with a circle-the-wagons mentality.

“I’m excited about this squad,” Harsin said. “We’ve got a lot of work to do, a lot of things to prove.”

The Tigers have plenty of question marks, especially offensively. But they do have a strong backfield duo in Tank Bigsby and Jarquez Henry. The offensive line is loaded with experience in a unit that has often been a weak link in recent seasons, with some added competition as a boost.

The Tigers must replace second-round NFL draft pick Roger McCreary at cornerback. But linebacker Owen Pappoe is back after missing most of last season with injury problems.

“We don’t expect anybody to pick us first, but that makes it all the sweeter when we come out on top,” Deal said.

Three transfers have been battling for the starting quarterback spot: T.J. Finley (LSU before last season), Zach Calzada (Texas A&M) and Robby Ashford (Oregon). Finley finished last season as starter after an injury to Nix, and nearly helped the Tigers upset Alabama. But he was arrested as preseason camp started and charged with attempting to elude the police.

Shedrick Jackson, coming off his best season, has the most experience but nobody behind him is proven. Ja’Varrius Johnson is the only other returning receiver who had double-digit catches, though tight end John Samuel Shenker emerged as a frequent target. Among the newcomers is LSU transfer Koy Moore.

Auburn does have some guys who can get after the quarterback. Derick Hall was third in the SEC with nine sacks last season, while Northwestern transfer Eku Leota had seven and Colby Wooten added five.

Harsin is already on his third offensive coordinator (Eric Kiesau) and second defensive coordinator (Jeff Schmedding). But both have previous experience in those roles under Harsin at Boise State. Much of Harsin’s staff is new, including new wide receivers coach and ex-NFL player Ike Hilliard.

Auburn starts out with five straight home games, including a nonconference visit from Penn State on Sept. 17. But the Tigers also have road trips to No. 3 Georgia, No. 21 Mississippi and No. 1 Alabama.