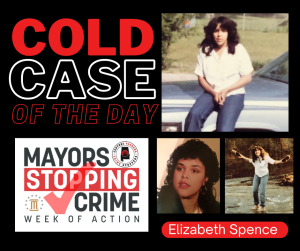 Central Alabama CrimeStoppers has announced the murder of Elizabeth Spence as its “Cold Case of the Day.” It’s a part of Montgomery Mayor Steven Reed’s “Week of Action” against violent crime.

On Wednesday, January 2, 1991, Spence, who was 27, was reported missing in Lafayette. At that time, Lafayette Police Chief Fred Lumpkin told reporters, “For her to have gone anywhere without her family knowing about it was completely out of
context.”

One week later, on Wednesday, January 9, 1991, Spence’s car, a Daihatsu Charade, was found by Montgomery Police in the parking lot of a department store on Atlanta Highway. The body was discovered unexpectedly after the car was turned over to  Lafayette police for inspection of evidence in Montgomery.

All tips are kept anonymous through CrimeStoppers.