A rise in hostility towards law enforcement officers — and the rule of law — has lead to a noticeable drop in the number of people pursuing careers in law enforcement.

“A lot of people aren’t getting into it,” said Dallas County Sheriff Mike Granthum.

“The numbers are down.” 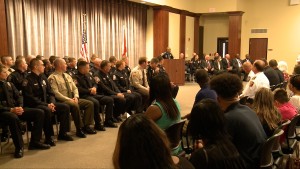 Thirty seven new law enforcement officers from 22 agencies around the state — are ready to hit the street — after completing the 14 weeks of intense training — required to become a certified officer.

“It was a challenge, you know. But we persevered through. But we still have a long way to go. This is just the beginning,” said new SPD officer Corvin Woods.

The new officers were sworn in for duty — during their graduation ceremony — Thursday morning in Selma.

Granthum says it’s a tough time to be a law enforcement officer right now. There are calls to defund the police. And officers have even become the targets — for enforcing the law. 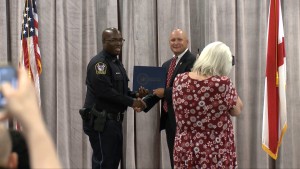 “Like the Capitol Police being attacked. The FBI is really being attacked right now. And they’re trying to do their job,” said Granthum.

“A lot of people don’t want to go by rules. It’s that simple. They want the law to be for everybody else but themselves. It’s a tough field right now. I mean everywhere you go people are bashing the police.”

Woods says he joined the force to try and make a difference in his community. And to help bridge the gap between the community and law enforcement.

“I figured why not join. Why not try to be a part of something to show people that that’s not who we represent,Woods said.

“Law enforcement as a whole is not out here trying to hurt you or do anything to you. We’re actually out here to serve.”