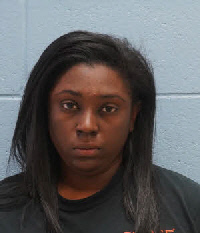 The Lee County Sheriff’s Office says a shooting in Loachapoka has left a man dead and a woman charged with killing him.

Investigators say they were called to a home on Lee County Road 620 just before 11:30PM Saturday. That’s where they found 23-year-old Elisha Leon Benjamin dead of a gunshot wound.

Sheriff’s investigators say they determined that 29-year-old Vonquetta Ytevia Levett shot him during an argument and that the shooting was connected to domestic violence.

Levett has been charged with manslaughter and is being held in the Lee County Detention Center on a $25,000 bond.

Investigators ask that if you have information about this case to call Central Alabama CrimeStoppers at (334) 215-STOP.