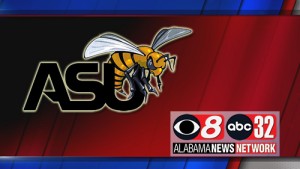 Freshman Dematrius Davis directed touchdown drives in each of the first three quarters to lead Alabama State to a 23-13 victory over Howard University in the MEAC/SWAC Challenge Kickoff on Saturday in Atlanta.

Davis led the Hornets on a five-play, 55-yard drive for a 6-3 lead on their second possession, culminating with Ja’Won Howell’s 3-yard TD run. The two-point try failed.

The lead grew to 13-3 in the second quarter when Davis took the Hornets 77 yards in seven plays, connecting with Isaiah Scott from 11 yards out for the score.

Alabama State turned the Bison over on downs in the third period and Davis took the Hornets 99 yards for a TD. Jacory Merritt ended the nine-play drive with a 21-yard TD run. Backup QB Myles Crawley hit Scott for a 61-yard gain on the drive. It was his only pass.

Davis completed 17 of 24 passes for 186 yards with an interception for the Hornets. Freshman Nathanial Eichner kicked a 29-yard field goal in the fourth quarter.