The suspect in a fatal Marengo County shooting — is now facing more charges. 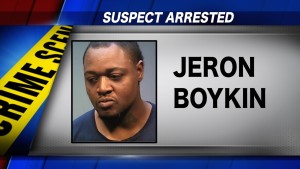 The charges against 30 year old Jeron Boykin now include murder — and six counts of attempted murder.

Boykin then barricaded himself inside of his home in the Flatwood community for several hours. Police used tear gas to force him out.

He was then arrested — and now remains in the Marengo County Detention Center — without bond.