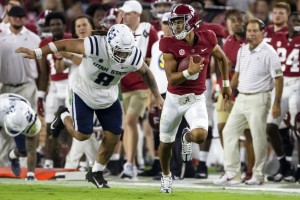 Bryce Young’s five touchdown passes were nothing all that new for Alabama’s Heisman Trophy winner.

That 63-yard sprint down the left sideline and other big runs presented a seldom seen side of his game.

Young didn’t just throw for those touchdowns — all in the first half — he even ran for 100 yards and a score in No. 1 Alabama’s 55-0 opening victory over Utah State on Saturday night.

It was, he said, a “cool” and “interesting” experience.

“Today that was just what was available. It’s cool.”

The Crimson Tide began their quest for national title redemption with a not unexpected start-to-finish domination of the six-touchdown underdog Aggies (1-1). Less anticipated: Young’s runs.

Known primarily as a passer with a penchant for scrambling and buying time, Young flashed his running ability more than he ever did last season, including a 63-yarder down the left sideline.

He also spread the ball around to Alabama’s new set of playmakers, with two touchdown passes to both Georgia transfer Jermaine Burton and Traeshon Holden and some handoffs to Jahmyr Gibbs.

Young ran five times after netting zero yards thanks to sacks last season with a previous long run of 16 yards. He also completed 18 of 28 passes for 195 yards before exiting one drive into the second half following his TD run.

“I see Bryce do that on the regular, so it wasn’t really new to me,” Alabama safety Brian Branch said. “Just watching him be himself out there is truly amazing. Playing with a Heisman winner, I can’t describe it.”

Gibbs, a much talked about transfer from Georgia Tech, flashed his speed with a 58-yard run on the first play after the half. He finished with 93 yards on nine rushes.

His backup, Jase McClellan, caught a pair of TD passes.

“It is what it is, and I’ve seen people in the SEC come here and get treated exactly the same way,” Utah State coach Blake Anderson said. “We’re not built that way. We’re a long ways from being able to play that game physically and match up. Maybe we’ll never be able to.”

Alabama spent the offseason stewing over a loss to Georgia in the national championship game and came in as the favorite to win the national title. Then Alabama did pretty much what it wanted to against a mismatched opponent. The Tide put some new playmakers on display after losing receivers Jameson Williams and John Metchie III and tailback Brian Robinson Jr.

The Crimson Tide didn’t do anything to diminish its status as the team to beat, but No. 3 Georgia and No. 2 Ohio State got the chance to make much bigger statements. The Bulldogs beat 11th-ranked Oregon 49-3. The Buckeyes topped No. 5 Notre Dame, 21-10.

Coach Nick Saban emphasized it wasn’t a perfect performance and there’s plenty of room for improvement. His players echoed that sentiment.

“It was good, but we still have stuff to work on,” Branch said. “It’s not like we played a perfect game.”

Added Saban: “No disrespect to Utah State — their players played hard, they’ve got a good little team. But we’re going to play teams that are much more physical and aggressive and talented than what they are, so we’re going to have to do things correctly.”