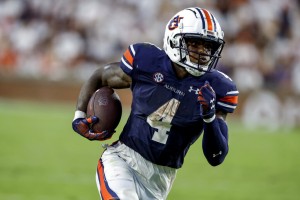 Auburn running back Tank Bigsby carries the ball against Mercer during the first half of an NCAA college football game Saturday, Sept. 3, 2022, in Auburn, Ala. (AP Photo/Butch Dill)

Tank Bigsby ran for 147 yards and two touchdowns and Auburn opened its season with a 42-16 home win over FCS opponent Mercer on Saturday night.

Bigsby was one of nine players who recorded a carry for the Tigers, who generated 285 of their 497 total yards on the ground. Jarquez Hunter scored three rushing touchdowns, while backup quarterback Robby Ashford generated 168 total yards as he split time with starter T.J. Finley.

At the 1:33 mark of the third quarter, the game was delayed for an hour and 27 minutes due to lightning. Bigsby scored from 39 yards out on the first play after the delay.

Finley finished 9-for-14 passing for 112 yards, one touchdown and two interceptions. Ashford took over at quarterback midway through the third quarter after Finley’s second interception.

Mercer (1-1) had only 101 yards of offense in the first half but found late success after the delay. Fred Payton finished 21 for 36 passing for 197 yards and two touchdowns, both of which went to Devron Harper.

The Bears were unable to keep it as close as their last trip to Auburn, a 24-10 loss in 2017, but they still had some positive moments on both sides of the ball. Mercer plays only FCS opponents for the rest of the season, so it can build on a solid two-game start.

The Tigers already have an interesting quarterback situation brewing after Finley’s two interceptions and Ashford’s effective debut. Auburn has another non-conference game next week in which it will be a clear favorite before hosting Penn State, so the quarterback usage will be monitored closely.