People in Dallas County may notice a smoother ride as they drive around the county.

It’s the result of several multi-million dollar road improvement projects in the county.

Raymond Richardson has lived on Choctaw Avenue in Selmont — for more than a decade. And he says the street has needed some work the whole time.

“It wasn’t anything that could damage your vehicle,” said Richardson.

Richardson says the road was bumpy with several bad patches. 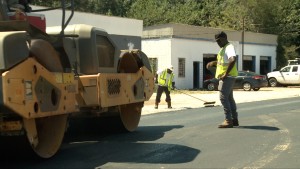 It was one of several roads that has now been resurfaced — as part of a major road improvement project underway in Dallas County.

Probate Judge Jimmy Nunn says resurfacing projects are also underway in the Beloit community — as well as Orrville and Valley Grande. He says roads in each of the county’s four districts — will be repaved.

“A lot of these roads are getting done cause of the general obligation money, the federal money and the Rebuild Alabama Act money,” said Nunn.

“If we didn’t have that, we would not be getting these roads done.”

Nunn says another major road improvement project is underway at the intersection of Alabama Highway 41 — and US Highway 80.

“This new project will give us a left turn lane on US 80, turning left onto 41,” said county engineer Heath Sexton.

“The intersection will be realigned so that 41 coming south will go straight across the road. It’ll also give us an acceleration lane coming off of 41 turning onto 80 going towards Montgomery. We think this is going to help a lot with the congestion,” said Sexton.

The price tag for all the improvements is about $6 million dollars.