It’s the first major construction project on the campus in 30 years.

The last time there was major new construction on the campus of Marion Military Institute — Cadet Jenna Beach of Pennsylvania — wasn’t even born.

“I know, I wasn’t even, yeah, I wasn’t even born. But it’s exciting to, new opportunity for everyone. So, it’ll be cool,” said Beach. 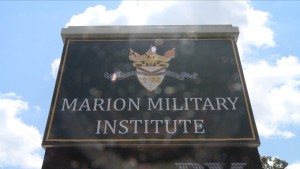 The new 17,000 square foot facility will include a 500 seat dining hall — a small conference space — along with a smaller private dining area.

“So the problem we have with our dining facility now is we cannot house the entire corp of cadets all at once. They have to come in cycles,” said MMI President, Col. David Mollahan.

MMI is part of the Alabama Community College System.

“And we take a lot of pride in being thee academy across this country,” ACCS Chancellor Jimmy Baker.

“It was a great step forward in our efforts to modernize this campus and the facilities that are needed for a 21st century education,” said Mollahan.

The new construction project represents a $14 million dollar investment in the institution.

Marion Military Institute serves about 325 cadets from all over the country.

It’s been preparing students for civilian and military service since 1842.