Fire destroyed the main building at Hobbs Elementary School in Camden — just before the end of the school year.

So, now with a new school year just getting underway — we went back to Hobbs — to see how things are going.

The building housed nine classrooms — as well as administrative offices. The loss has forced school officials — to make a some changes around campus. 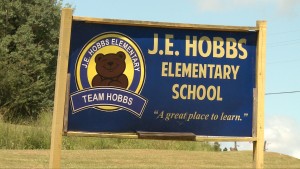 “We had head start in another location on the campus. However, we needed those classrooms for our Pre-K through 6th grade students who were in the building that we lost,” said Superintendent Dr. Andre Saulsberry.

The burned out building was demolished this summer — and the site where it stood has now been cleared.

“Just to pull up on campus and see that site, see it empty, it was just breathtaking. Because, I’m a product of that elementary school,” said Hobbs Principal Bernita Laister.

Saulsberry says plans to rebuild — continue to move forward. But the ultimate goal — is eventually to build a new Early Childhood Education Center.

“So that students that age can be under one roof so to speak. And therefore we would still like to have the Hippie program, that starts at 2 years old. As well as the head start, all the way up through 6th grade,” said Saulsberry.

“Because we believe that the earlier we get them the more successful it’ll be with them academically and socially as they move up towards the 12th grade.”

Saulsberry says the cause of the fire — is believed to have been electrical.

JE Hobbs has about 450 students — ranging from Pre-K to 6th grade.