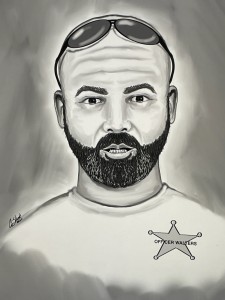 The sheriff’s office says on Wednesday, August 24, at about 4:20PM, they got a 911 call from someone saying they were pulled over by someone impersonating a police officer.

Deputies responded to the 1000 Block of Lee Road 183 and met with the complainant, who said she had been pulled over on Lee Road 183 near Highway 280 east, close to Dudley Lumber Company in the Salem area.

The sheriff’s office says the suspect was a white male driving a white Dodge Ram truck which had flashing lights mounted in the grill and the windshield of the truck. The suspect was wearing a white T-shirt with the sheriff’s logo sewn in, with “Officer Walters” printed as the name.

They say when the male heard the complainant on the phone with 911, he drove off.

A sketch of the suspect was created to help identify the suspect. If you know the identity of this person or have any information about this case, contact the Lee County Sheriff’s Office at (334) 749-5651 or Central Alabama CrimeStoppers at (334) 215-STOP.