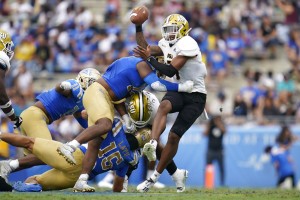 Backup quarterback Ethan Garbers threw for 164 yards and ran for a pair of touchdowns, and UCLA improved to 2-0 for the second consecutive year with a 45-7 rout of Alabama State on Saturday.

Garbers came in for Dorian Thompson-Robinson midway through the Bruins’ fourth drive early in the second quarter. The redshirt sophomore directed scoring drives in five of seven possessions (four TDs, one field goal). He completed 14 of 18 passes with both of his rushing scores coming in the second quarter as the Bruins built a 31-7 halftime lead. Thompson-Robinson was on target for his first six passes, including a 25-yard TD to Hudson Habermehl late in the first quarter, and finished 9 of 11 for 101 yards.

Alabama State’s (2-1) lone score came with 13:53 remaining in the second quarter when Jeremiah Hixon caught a 21-yard touchdown pass from Myles Crawley. Crawley was 16 of 27 for 177 yards with a touchdown and interception.

With UCLA facing a Football Championship Subdivision team for the first time, Notre Dame and Southern California remain the only schools who haven’t played a team outside the FBS. However, the Fighting Irish will face Tennessee State next season.

Alabama State fell to 0-12 against FBS opponents since 1980. They have been held to 19 points or fewer in every game.

The Hornets will host Prairie View A&M on Sept. 24.