Auburn Falls to No. 22 Penn State 41-12 in Fifth Straight Loss to a Power Five Team 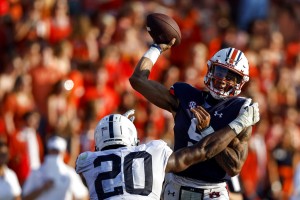 Auburn quarterback Robby Ashford (9) is hit by Penn State defensive end Adisa Isaac (20) as he throws the ball during the second half of an NCAA college football game, Saturday, Sept. 17, 2022, in Auburn, Ala. (AP Photo/Butch Dill)

Auburn (2-1) suffered four turnovers and star running back Tank Bigsby was held to 39 rushing yards in the Tigers 41-12 defeat to No. 22 Penn State at Jordan-Hare Stadium Saturday.

Auburn quarterback T.J. Finley had 152 passing yards, an interception and a lost fumble before being replaced in the second half by Robby Ashford.

“The ability to be more balanced and take pressure off the passing game has been really important for us,” said Penn State coach James Franklin. “We also have some dynamic backs that can help create some explosive plays.”

Penn State led by one point late in the second quarter before Allen scored his first of two touchdowns. After Auburn opened the third quarter with a three-and-out, Singleton broke a 54-yard run and found the end zone two plays later.

The Nittany Lions scored 20 more points in the second half to pull away for the comfortable win in what was the first game against a Big Ten opponent for Auburn inside Jordan-Hare Stadium.

The pressure on Harsin will only increase. The loss was Auburn’s fifth straight to a Power Five team. On top of the four turnovers, the Tigers’ offense was unable to establish a consistent rushing attack and allowed a large amount of pressure in the passing game.

“The key is, really, how we handle the disappointment,” Harsin said. ”… We still have a long season ahead of us. There’s still a lot of football to play.”

The 29-point win tied Penn State’s second-largest margin of victory over an SEC team, matching the win over Auburn in the 1996 Outback Bowl.

“There haven’t been too many teams in the history of the Big Ten to come on the road and get a win in the SEC,” Franklin said. “So we’re very, very proud of that.”

Franklin called Auburn’s four turnovers to Penn State’s zero “the story of the game.” Through three games this season, the Tigers have not had a single defensive takeaway and currently sit at minus-8 in turnover margin.

Up next, Auburn hosts Missouri in its SEC opener next Saturday.