No. 2 Alabama Rolls over Louisiana-Monroe, 63-7 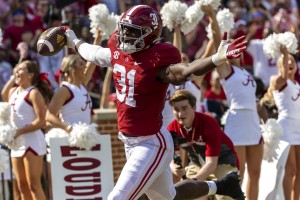 Alabama linebacker Will Anderson Jr. (31) runs back an interception for a touchdown against Louisiana-Monroe during the first half of an NCAA college football game, Saturday, Sept. 17, 2022, in Tuscaloosa, Ala. (AP Photo/Vasha Hunt)

Alabama scored on a long touchdown pass, a pick-six and a blocked punt in just the first six minutes of its 63-7 rout over Louisiana-Monroe.

Bryce Young passed for three touchdowns and rushed for a fourth, Will Anderson Jr. scored on an interception return Saturday at Bryant-Denny Stadium in Tuscaloosa.

The Crimson Tide (3-0) scored on offense, defense and special teams in the first six minutes and raced to a 28-0 first-quarter lead. It was a whirlwind start against the 49 1/2-point underdog Warhawks (1-2) a week after a much closer-than-expected victory over Texas cost Alabama the No. 1 ranking.

“There’s some evidence out there that this is the standard we want to play to,” Saban said, noting that the competition gets tougher with Southeastern Conference play upcoming.

It wasn’t a seamless performance throughout for either the Tide offense or Young, the reigning Heisman Trophy winner. But special teams came through, including a school-record for punt return yards.

Young completed 13 of 18 passes for 236 yards but also threw his first two interceptions of the season. He did run for a 7-yard score, where he spun near the goal line and dove across.

Anderson returned his first career interception 25 yards for a touchdown, one play after Young’s initial pick. The national sacks leader a year ago, he also got his second sack of the season.

“What can’t he do?” cornerback/return man Kool-Aid McKinstry said.

“He was probably surprised he caught it, I ain’t gonna lie,” linebacker Henry To’oTo’o said. “He had a little stiff-arm and he was just watching it when they did the highlights on the board. And he was like, ‘I can’t believe I did that.’”

Chandler Rogers completed 11 of 21 passes 96 yards for Louisiana-Monroe and was intercepted once. Malik Jackson ran for an 11-yard touchdown, set up by the Tide’s failed fourth-down attempt.

“It went like most people thought it would go,” Louisiana-Monroe coach Terry Bowden said. “They were just too good for us in every phase of the game. You could watch the video and say that’s kind of what you’re stepping into, but you still prepare for them not to play well or something to go wrong. And you have a better game.

“And as I talked to the team afterwards, they were so good in every phase.”

Jahmyr Gibbs remained the Tide’s most versatile weapon. He gained 36 yards on nine carries and caught four passes for 65 yards, including a 37-yard touchdown when he juked one defender and shed a couple of downfield tackle attempts.

This game won’t mean much in the big picture for Alabama’s season, but it started out as a nice, swift rebound from the Texas game. The Tide did have a lull before a pristine Young-directed TD drive in the final two minutes before the half.

Alabama had 262 punt return yards to break a 75-year-old game record set against LSU in 1947. McKinstry flirted with scores on returns and Brian Branch produced one in the fourth quarter. McKinstry averaged 34 yards on his first four returns. Then Branch returned a punt 68 yards for a TD. Gibbs also had a 57-yard kick return.

“The blockers did their job and I can’t do anything but give them thanks for creating the lanes for me to take,” McKinstry said.

There’s no chance Alabama will overtake No. 1 Georgia on Sunday after the Bulldogs beat South Carolina 48-7. Chances are the Tide will stay put.

Alabama’s receivers, for the most part, are having quiet seasons. The tight ends, however, came up big on the final first-half drive. Cameron Latu had three catches, including a 38-yarder when he reached over a defender downfield. Freshman reserve Amari Niblack then caught his first pass, a 15-yard TD.

Up next, Alabama hosts Vanderbilt in the Southeastern Conference opener.