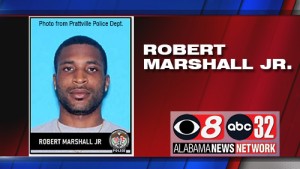 Prattville police have announced a suspect they are seeking in a hit-and-run that killed a pedestrian earlier this month.

Police say they are seeking 29-year-old Robert Marshall, Jr., and are asking him to turn himself in on warrants. They say he was the driver of a white 2006 BMW X5 SUV that was involved in the hit-and-run.

As Alabama News Network has reported, Police say 23-year-old Perez Pickett died after being hit in the 700 block of Gin Shop Hill Road at about 7:28PM on Sunday, September 4. Police say the driver did not stop.

Last week, police released surveillance photos of the vehicle they believed was involved in the case.

Police say a witness on the scene had provided a description of the vehicle and said the driver continued north on Gin Shop Hill Rd. in the direction of 4th Street after hitting Pickett.

Police Chief Mark Thompson says a lot of false information has been spread on social media about the case. He says information will be released through traditional media outlets and not over social media.