HOT DAYS AHEAD: Today and tomorrow expect lots of sunshine both days. Highs today will be in the mid 90s for most locations, but will be in the mid to upper 90s tomorrow and Thursday as a surface high and an upper ridge will cause sinking air. Again, rain chances are very low but not zero, as there could be a stray shower possible this afternoon.

FALL ARRIVES: A dry cold front will pass through the state late Thursday; the day will be mostly sunny with a high in the upper 90s, but due to low moisture levels, rain is not expected. Thursday will be the first day of fall as the autumnal equinox occurs at 8:03PM CDT.

NEXT WEEK: Showers end early Monday; the temperatures will hold in the 80s much of the day. Then, the rest of the week looks generally dry with highs in the 80s and lows in the 60s, close to average values.

HURRICANE FIONA: At 500 AM EDT, the center of Hurricane Fiona was located near latitude 21.3 North, longitude 70.9 West. Fiona is moving toward the north-northwest near 10 mph. This general motion is expected to continue through today, followed by a turn toward the north tonight or Wednesday. On the forecast track, the center of Fiona will pass near Grand Turk and the other eastern Turks and Caicos during the next few hours. 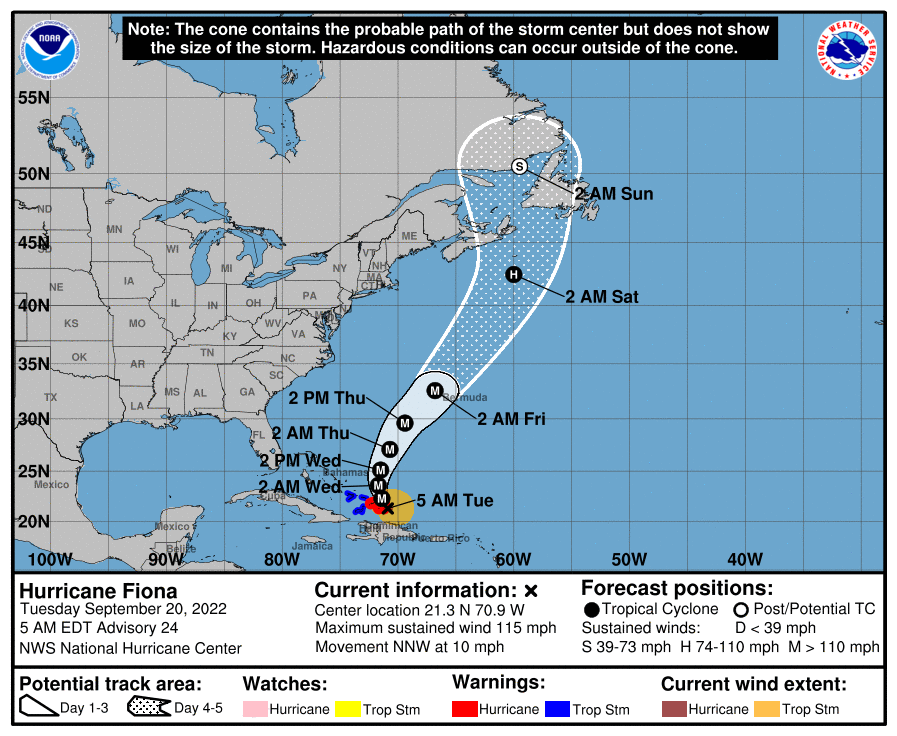 Maximum sustained winds are near 115 mph with higher gusts. Fiona is a category 3 hurricane on the Saffir-Simpson Hurricane Wind Scale. Strengthening is forecast during the next couple of days. Hurricane-force winds extend outward up to 30 miles from the center and tropical-storm-force winds extend outward up to 150 miles. The estimated minimum central pressure is 967 mb (28.56 inches).

Elsewhere in the tropics, we could have Gaston and Hermine sooner than later. 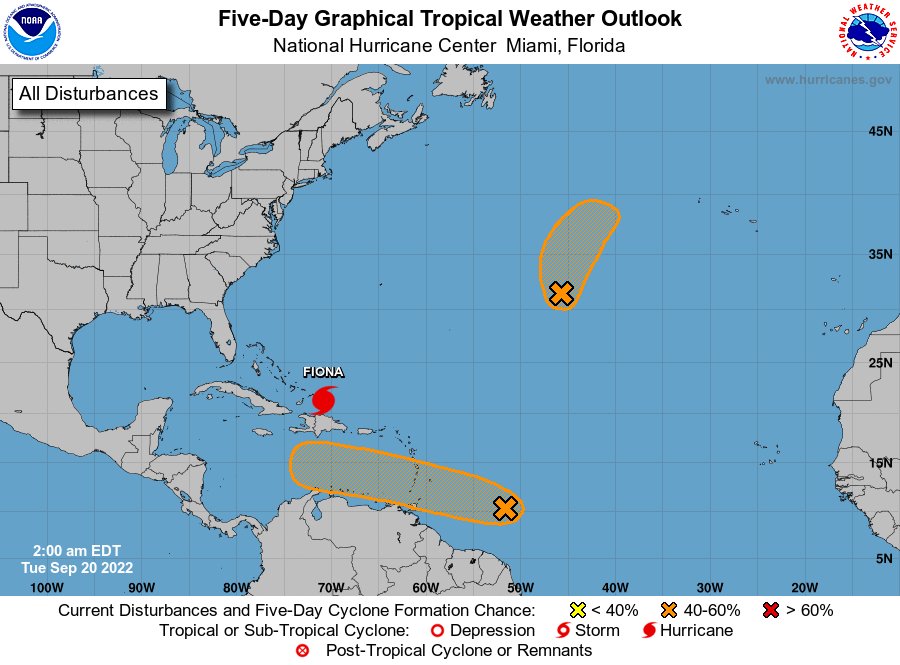 1. Shower and thunderstorm activity continues to increase in association with an area of low pressure located over the central subtropical Atlantic. Environmental conditions appear marginally favorable for additional development, and a tropical depression is likely to form over the next couple of days before upper-level winds become less conducive later this week. The system should generally move northward or northeastward while remaining over the open waters of central subtropical Atlantic. Formation chance through 48 hours…medium…60 percent.

2. A tropical wave located several hundred miles east of the Windward Islands is producing a broad area of disorganized showers and thunderstorms. Gradual development of this system is forecast during the next several days as the system approaches the Windward Islands, and a tropical depression could form toward the latter part of this week or weekend as the system moves into the eastern and central Caribbean sea. Formation chance through 5 days…medium…40 percent. This is one we will have to keep an eye on as long range models suggest it could become a hurricane destined for the Gulf of Mexcio.

Stay cool if you can these days!!!
Ryan

No Signs of Rain Anytime Soon for Alabama