Scores of city workers are on strike in Selma.

About 65 workers in the city’s Cemetery, Recreation and Public Works Departments — are demanding better pay.

“You can’t raise a family on that type of, on the type of income we make out here.

Landfill Secretary Lashone Edwards is a single mother — trying to provide a home for her children.

“Nine dollars an hour, that’s not enough to take care of four kids in the current economy that we have,” she said. 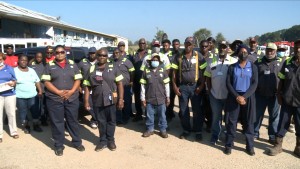 No sewer problems will be fixed, no potholes will be filled and no grass at cemeteries will be cut, as long as the city workers who do it remain on strike.

Cassandra Jones is a certified CDL driver. She says although she could make more money somewhere else — she wants to keep working for the city.

“Because I love the city that I live in,” said Jones.

Council President Billy Young says a budget proposed by Mayor James Perkins Jr. that included an across the board raise for city workers — was rejected by the council.

The council then sent a suggested budget to the mayor — that mainly focuses pay raises — for underpaid workers.

“The majority of them are getting a raise,” Young said.

“If we don’t stand for something, we’ll fall for anything,” said Trina Brown.

“And all we want to do is just be treated equal and fairly,” said Freddy Jones, Jr.

We tried to contact Mayor Perkins about the matter — but were unsuccessful.

City leaders have until October 1st — to pass a budget for the new fiscal year.