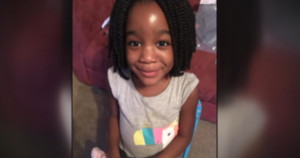 Taylor Rose Williams, who was reported missing in 2019 and whose body was later found near Demopolis.

The mother of a five-year-old girl whose body was found in Marengo County in 2019 has now been sentenced.

Brianna Williams has been sentenced to life in prison in Jacksonville, Florida, after pleading guilty to second-degree murder.

Williams is a former Naval Petty Officer in Jacksonville, but is from the Marengo County area.

She had reported that her 5-year-old daughter Taylor Rose Williams was missing on November 6, 2019, which had triggered an Amber Alert. Then investigators say she stopped cooperating with them. Police found human remains November 12, 2019, near Brianna Williams’ hometown of Demopolis.

Soon after, Williams was hospitalized for more than a week after trying to kill herself with an apparent overdose, officials said.

The judge says there can’t be an expert opinion on how Taylor died because of how her body was disposed.