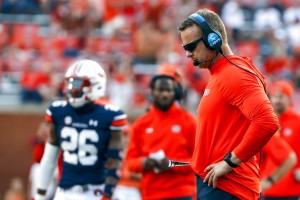 Auburn head coach Bryan Harsin reacts after a turnover during the second half of an NCAA college football game against Penn State, Saturday, Sept. 17, 2022, in Auburn, Ala. (AP Photo/Butch Dill)

Auburn is trying to rebound from a blowout loss to Penn State when Missouri visits Jordan-Hare Stadium for the first time Saturday.

It’s the Southeastern Conference opener for both teams.

Auburn lost 41-12 to Penn State last week. Missouri suffered a similar fate in its only other Power Five game, losing 40-12 at Kansas State.

Auburn has dropped five straight games against Power Five opponents and has totaled 18 points in the last six quarters.

Auburn and coach Bryan Harsin are trying to keep the season from going off the rails. Auburn has scored just 18 points in the last six quarters and dropped five straight against Power Five teams. Missouri had to rebound from a nearly identical margin of defeat (40-12) to Kansas State. But Abilene Christian didn’t provide much of a challenge.

Which passing game will break through? Auburn’s two-quarterback rotation has led to the 87th-rated passing offense, producing just 225.3 yards a game and two touchdowns total. Missouri’s Brady Cook had career-highs with 297 yards and three touchdowns, albeit against Abilene Christian. Missouri still ranks 94th with an average of 218.3 passing yards.

Harsin has refused to say if he’ll make a quarterback change or discuss the health status of T.J. Finley, who appeared to suffer an injury to his non-throwing shoulder against Penn State. But neither Finley nor backup Robby Ashford has been consistent. Finley has been intercepted four times and Ashford twice in three games. They’ve each thrown one touchdown pass. Former Texas A&M starter Zach Calzada hasn’t played.

Auburn is 24-5 over its last 29 SEC openers. Several Missouri staffers have ties to Auburn and/or Harsin, including head coach Eliah Drinkwitz. Drinkwitz worked under the Auburn coach at Arkansas State and Boise State. He also worked at Auburn in 2010-11.

Kickoff is at 11AM CDT on ESPN.

SPORTS ANALYST JOHN LONGSHORE: What's Wrong with Auburn and How Can It Be Fixed?